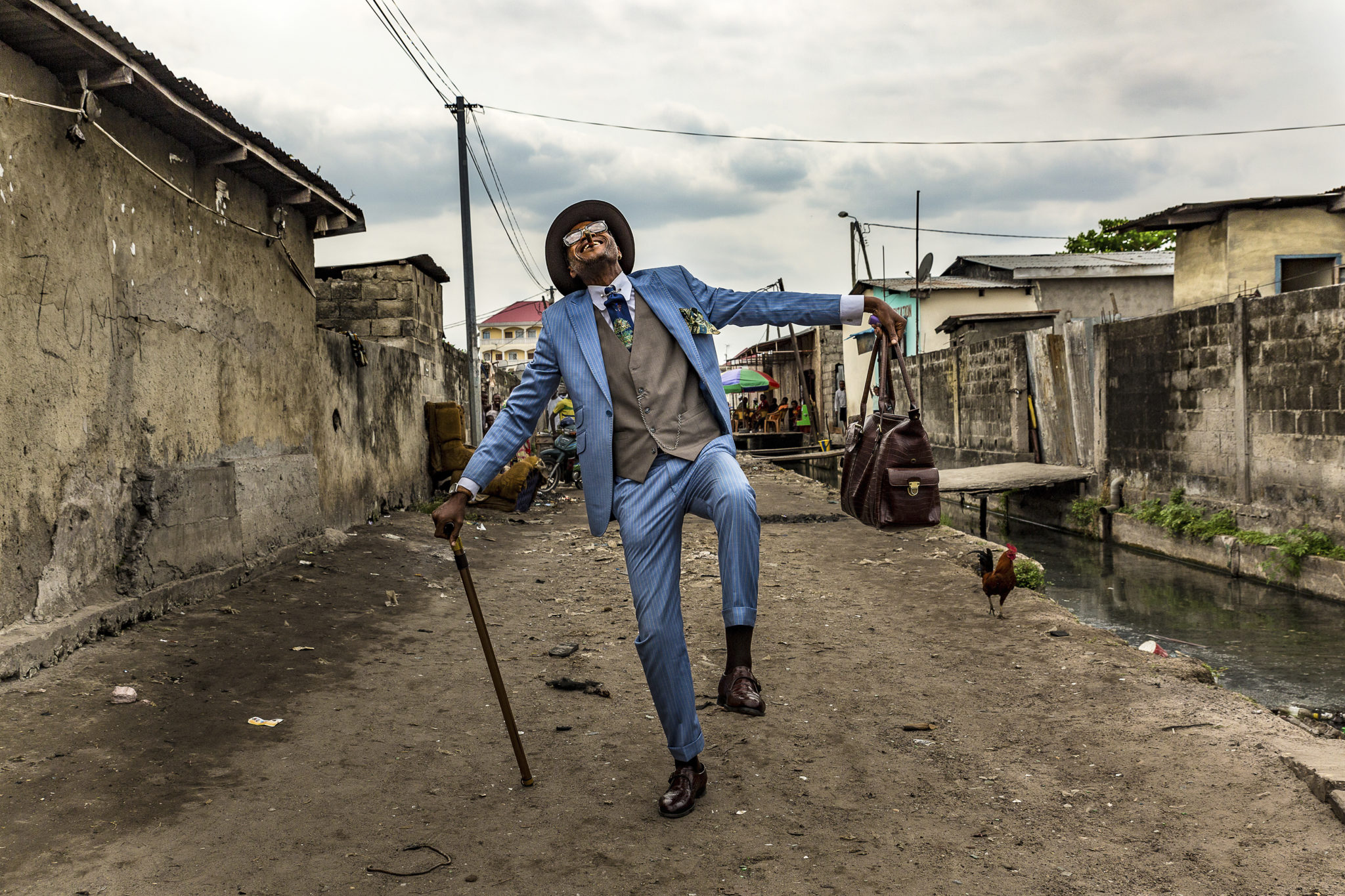 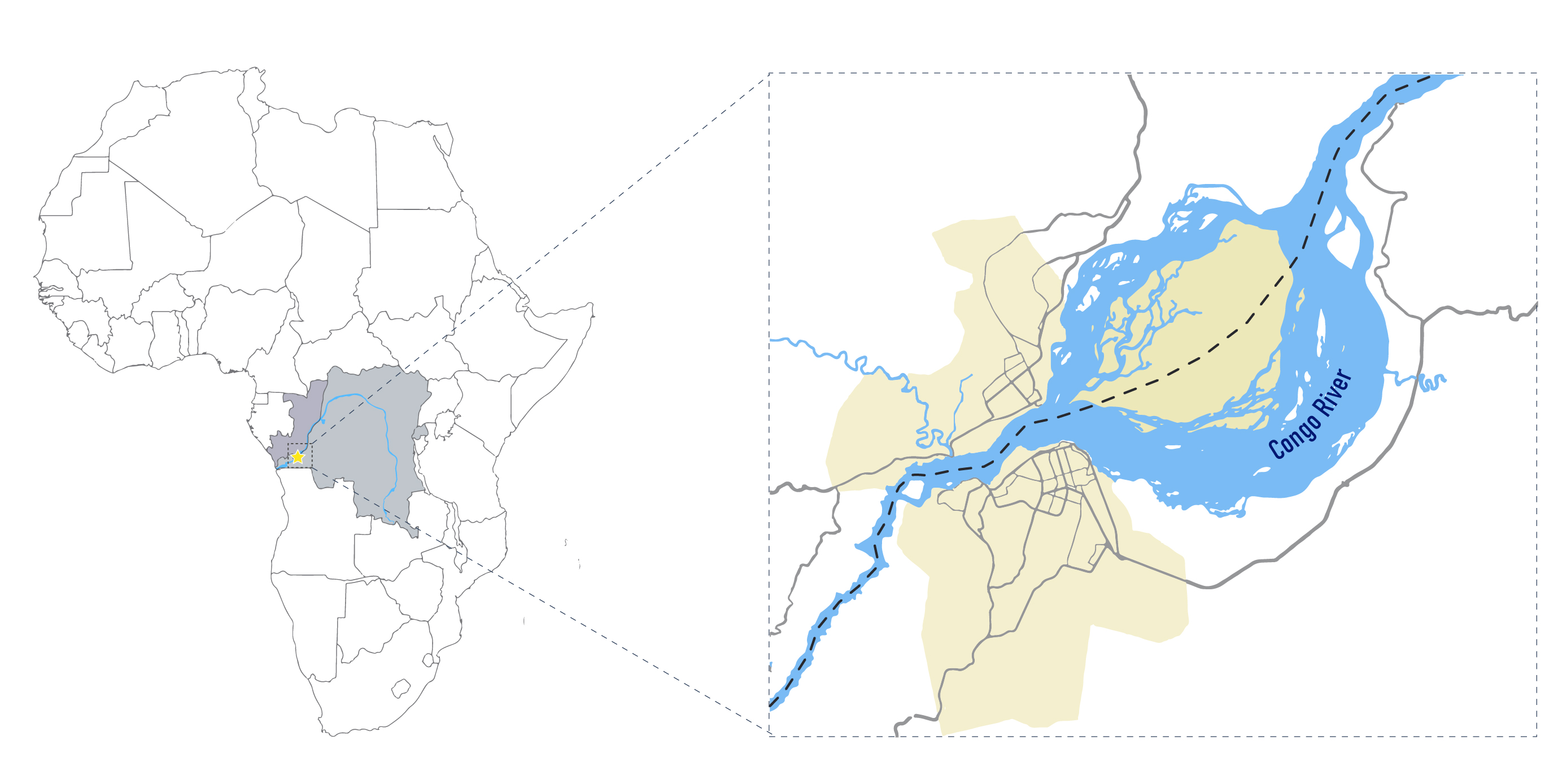 Kinshasa, the largest city and capital of the Democratic Republic of the Congo (DRC), locates around 320miles(515km) from the Atlantic Oceans on the south bank of the Congo River. The capital of the Republic of Congo, Brazzaville, lies across the river. The landscape and culture are similar, so they are called The African Twin Capitals. The population of Kinshasa is about 14 million, currently ranks the 2nd largest in Africa. In 2050, the population projection of Kinshasa-Brazzaville will reach over 38 million and become one of the largest metropolitan areas in the world. Looking at the geography, the Congo River plays a particularly important role in gaining resources and transporting goods. It is the 2nd longest river in the world by discharge volume. Traveling and transporting on the river has long been commonly seen in Congo traditions.

Traditional Mythology
TheBushongo mythology believes that the universe starts with darkness and water, the universe starts with darkness and water, and then the creator god in a gigantic white form created the world by vomiting the earth, plants, animals, and humans to the continent.
Congo Landscapes
The Kingdom of Kongo, formed in 1390, was born with affluent natural resources such as rainforest, savanna, the energetic Congo river, and abundant mining resources including diamond, cobalt, copper, tin, and gold, which made the country's major source of export income.

The Colonial Time
The city of Kinshasa was colonized as a trading post by Henry Morton Stanley in 1881. It was first named Léopoldville in honor of King Leopold II.

In 1885, Leopold II of Belgium took the Congo Free State as his private project, starting the period later called Congo Horrors. Millions of Congolese were mutilated, killed, or died from disease during his rule, particularly associated "slave society" in collecting natural rubber for export.

​In 1960, Congo became independent, named Republic of the Congo, and the city changes its name to Kinshasa in 1966.
War and Conflict
Almost immediately after the Congo became independent in 1960, a period of political upheaval and conflict started in this country called The Congo Crisis. It was a proxy conflict in the Cold War between the Soviet Union and the United States.​The Congo Crisis ended with the country under the rule of Mobutu the new president and dictator, who later change the country's name to Zaire.​Later in 1996, The Rwanda genocide causing the First Congo War, and followed by the Second Congo War. The wars ends on 2003
La Sape and Consumerism
La Sape, an abbreviation based on the phrase Société des Ambianceurs et des Personnes Élégantes (French; literally "Society of Ambiance-Makers and Elegant People"), is a subculture centered on the cities of Kinshasa and Brazzaville. Regardless of the level of poverty, Sapeurs (adherents of La Sape) sure do live an expensive and extravagant lifestyle.

Buying clothes from famous well-recognized brands such as Louis Vuitton, Gucci, Cartier or Givenchy sets the Sapeurs back an extraordinary amount of money. ​

Kinshasa artist Papa Mfumu'Eto 1er describes the modern life of Kinshasa using daily consumer goods, most of them are products from western countries and China, reflecting the neocolonialism and consumerism in the modern society of Kinshasa.
The Twin Cities
The city Kinshasa and Brazzaville, which often is called Africa's Twin Cities, forms a transborder agglomeration, as they face each other across the Congo River. In addition to being the closest national capitals by proximity, it is the third-largest urban agglomeration on the African continent.​The two cities currently do not have a bridge between each other. They have decided the location of the bridge and planning to spend 550 million US dollars on it. But It is still seeking financing.
The City of River
The Congo River has been an inalienable part of Kinshasa-Brazzaville’s history. It was used to transport cargo since pre-colonial times. Large river steamers worked the river until quite recently. Many people travel daily on the river between different cities on barges. The Congo River still is a lifeline in a land with few roads or railways.​

Opportunities for the Congo River and its tributaries to generate hydropower are enormous. Scientists have calculated that the entire Congo Basin accounts for 13 percent of global hydropower potential. This would provide sufficient power for all of sub-Saharan Africa's electricity needs. The D.R. Congo has announced to build the largest hydropower project: the Grand Inga Dam.​

To build a great city on the river has been a dream of Kinshasa. The project "La cité du Fleuve" launched in 2008, situated on reclaimed land space in the sandbanks and marshes of the Congo river, has never been finished.
From Past to Future
​In the Kongo cosmology of the life cycle, the end of life is also the starting of life. This drawing is developed in the same idea: the end is the same as the start. The future is connected to the past, while the past will lead to the future.

With the formation of the new African Union, the Democratic Republic of Congo was finally able to take full control of its rich natural resources, accessing its abundant wealth to provide every citizen with high-quality basic services including free housing, education, food, and high-speed internet, as well as continual employment for those who desired it.

However, despite the shift away from the late-twentieth-century neoliberal economic model, consumerism has not disappeared from the DRC but has become even more important. Consumption is now the only thing that gives residents a purpose. Specifically, the DRC’s historic La Sape culture, which was long seen as controversial, has become a common part of daily life. In 2050, fashion and design, as a perfect manifestation of the "create, consume, destroy" circle of consumerism, drives the Congolese society to keep functioning.

Simultaneous with this economic shift, global climate change has caused severe flooding along the length of the Congo River. Though a sad story for the historic built form of the Kinshasa-Brazzaville mega-region, residents have embraced the increasingly volatile river, shifting settlement and urban life onto thousands of individual flotillas. As a result, a new type of city has formed. A city distributed along the length of the river for more than 2000 miles, while still functioning as one single urban agglomeration. Thanks to technological innovations, residents continue to gather, albeit virtually, and remote businesses are as natural as physical businesses have always been.

The City of Kinshasa, as a physical space, no longer needs physical infrastructure. But residents still long for a physical gathering and a tangible urban environment. As a solution, the "La Cité du Fleuve" project has been reimagined. Unlike the original project, first proposed in 2008, which ended prior to completion, the new city of the river now stands on the location of Ile M'Bamou. It is a dazzling place, celebrating fashion and consumerism. Year after year, people yearn for the opportunity to visit the city, rendering it the most anticipated, desired experience in the Congo.
Learn More on the Original Project Site
Bingjian Liu